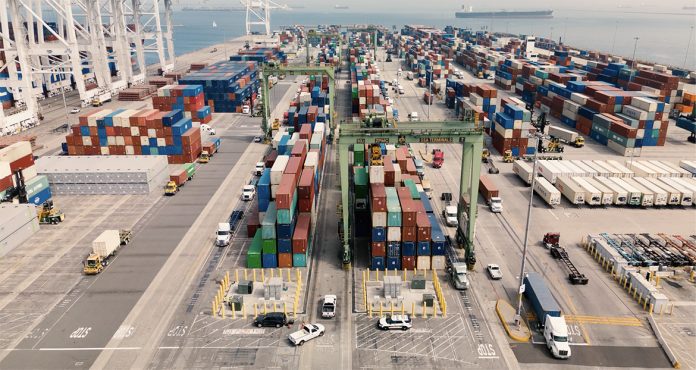 Container carriers serving Indian trades continue to face steep freight rate declines amid a weakening demand outlook that industry observers believe will only worsen in the days ahead, according to a new market analysis by Container News.

On the westbound India-Europe trade, average contract rates from West India [Jawaharlal Nehru Port (JNPT)/Nhava Sheva or Mundra Port] to Felixstowe/London Gateway (UK) or Rotterdam (the Netherlands) crashed to US$1,300 per 20-foot container and US$1,600/40-foot container at the end of last month, from US$2,300 and U$2,500, respectively, in November.

December eastbound cargo (imports into India) prices for these port pairings, however, saw no noticeable changes month-on-month, with continuing to hover at US$1,400/TEU and US$1,500/FEU for bookings from Felixstowe/Rotterdam and at US$1,150/TEU and US$1,400/FEU to West India (Nhava Sheva/Mundra).

Rates on intra-Asia trades out of India also dropped measurably in December from the month-ago averages, with West India-South China cargo seeing the steepest hit – down by nearly 50% to US$257/20-foot box and US$382/40-foot box, versus US$500 and US$750, respectively, in November, the analysis showed.

Average contract rates offered by major carriers to regular clients for bookings from West India (Nhava Sheva/JNPT or Mundra) to Shanghai (Central China) fell to US$125 per 20-foot container and at US$130 per 40-foot box, versus US$150 and US$250, respectively, in November.  For Indian cargo to Tianjin (North China), rates were down to US$150/20-foot box and US$300/40-foot container, from US$200 and US$350 in November.

Contract rate levels on the return leg continued to drop, with the slide averaging between 15 and 25% for bookings from Shanghai/Tianjin to West India from the November levels, according to the CN analysis.

Amid the market challenges, carriers have begun to rework their vessel deployment strategies to stay profitable.

Vaswani further noted, "Optimisation of vessel space is obviously one of the key considerations while allocating space (to demand areas), thereby helping the lines to service the trade at large better."

He went on to add, "Operational costs also play a role while deciding port rotation and, in that respect, ports globally compete with each other to attract more traffic. Indian ports are no exception. This is even more so when volumes and revenues decline."

According to Bharat Thanvi, co-founder of Mumbai-based digital forwarder Freightwalla, major trades out of India witnessed a 45% rate slide from August through October 2022.

"By the end of 2022, if the demand does not increase, the rates are expected to witness further downfall," Thanvi said.

He further said, "What we are seeing now is dipping demands from the US, UK and other major regions due to high inflation. Moreover, the production in US factories has also seen a worrisome decline in the past couple of months."

He went on to explain, "US manufacturing order to China have declined 40%. The USA commerce department reported the sharpest dip in the retail sales in 11 months. There is an effect seen at Indian ports as well, the rates for TEU and 40-foot containers from Nhava Sheva to the Adriatic, Baltic, and other regions have decreased by an average of US$1000 just in the past 50 days. This trend witnessed its worst turn in the first half of December where the rates suffered a major setback just ahead of the holiday season."